Steve is an antivirus expert with a unique ability to combine his technical knowledge and effective written communication techniques. He is a reliable and dedicated professional writer with years of experience in the field.

Q1: Tell us a bit about yourself and your education with antivirus software.

A: I decided on my career by combining my Honors Degree in Information Technology and a lifetime passion for tech-security and software journalism. I’ve always been fascinated with the evolution of internet security trends. I spent the last 5 years advocating for cyber-security and internet freedom, sharing my ideas through various media outlets. I’m very up to date on the latest antivirus technology.

Q2: Tell us a bit about the history of Antivirus software?

A: Antivirus programs were originally created to detect and eliminate viruses from computers. Time went by, the internet evolved, and technologies advanced. The sudden advancement in technologies saw the birth of modern antivirus software, which protected computers from both normal viruses and all sorts if malware attacks.

The year 1971 marked the birth of the first antivirus software called Reaper. The antivirus, which was designed by Ray Tomlinson, an American developer, was meant to eliminate the world’s first virus called Creeper.

Towards the late ‘80s, the world saw major advancements from the antivirus software industries. In the year 1987, Bernd Fix, a German security expert created a program that would remove Vienna – a virus, which infected .com files on DOS systems. That same period saw a major antivirus released that was designed to protect all Atari ST Computers. G Data Software AG – a German company – also created another Ultimate Virus Killer (UKV) 2000. The McAFee was founded around the same, and they unveiled their debut version of VirusScan.

1986 saw the birth of the German iconic cybersecurity company Avira; who released their premier version of AntiVirus (commonly called Luke FileWalker). Moreover, the Czech republic cybersecurity firm Avast was founded around that time, and they went on to launch their first variant of Avast Antivirus. Interestingly, Avast designed their first VPN, which they called Avast SecureLine VPN.

In 1991, Symantec – commonly known for its Norton tier of software products – unveiled its first version of Norton AntiVirus. That same year, AVG Technologies, a Dutch cybersecurity firm, came into existence, and they debuted the first version of AVG AntiVirus a year later.

Elsewhere, Slovakia based firm ESET began its operations in 1992, a cybersecurity company founded by the pioneers of NOD32 Antivirus.

The evolution of antivirus software continued in 1996 when Romanian based BitDefender began its operations. By the year 1997, Eugene and Natalya Kaspersky (still married at the time), founded Kaspersky.  A year later, saw Kaspersky make a name for itself when the software eliminated the famous CIH (commonly called Chernobyl).

The 21st century saw more cybersecurity developments, for instance, in 2005, Finland based firm F-Secure created the first ever anti-rootkit, which they named BlackLight. McFee also left a touch of its existence by launching Artemis, a cloud-based anti-malware tool – a fresh addition to its famous McFee VirusScan edition. In 2011, AVG Technologies also entered the competition and developed a similar tool they called Protective Cloud Technology.

It’s without a doubt that the whole antivirus software evolution since the ‘80s is what has made cybersecurity a global powerhouse in the market. And while cybersecurity is currently the leading industry which generates billions of dollars annually, more technological advancements are yet to come.

Q3: Antivirus software can be expensive. What do you think about some of the free options out there, such as TotalAV?

A: With the current internet age, most software creators are releasing free versions of apps for smartphones, computers and other smart devices. But the big question remains, should you put the trust of your cybersecurity to a free software tool?

Whether it is Windows, Android macOS, or iOS, some length of security is constantly required. Viruses, malware, and botnets are a daily security problem always looking to damage your device.

While several premium antivirus software companies have definitely gained from cyber-attacks, there are several others currently offering free cybersecurity protection. There are also those with paid packages but also offer free basic protection tools – for example, TotalAV.

The primary difference between free and premium antivirus software tools is the features they offer. Most features offered by premium products can be greatly significant, and the ease of use that comes with them. However, some free antivirus software are capable of offering all the necessary features. 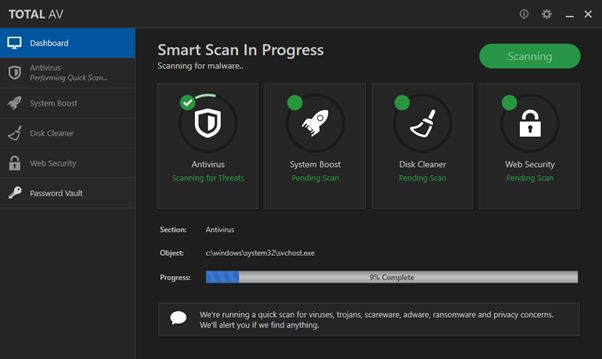 In particular, I compared the free and paid versions of TotalAV software. Admittedly, the free version of TotalAV offers all the basic features needed from an antivirus. For instance, it has basic features like system scans – ‘Quick Scan’, ‘Full Scan’ – and disk cleaner functionalities. But TotalAV has extra features that are off the charts, such as web security features, which includes a VPN tool, and an Ad-blocker functionality. There’s also a Password hint that acts as a perfect password management tool.

At this point, I did not find a compelling reason to use the premium version of TotalAV.  The free version did what I needed.

Q4: How often should do you a virus check on your computer?

A: A good antivirus program like TotalAV should offer real-time protection of your device against malicious attacks. However, regular system scans are of significant importance.

You can always customize the periods when you want your antivirus to scan your computer. Nonetheless, scheduling your PC to scan each day is probably a little too much, while, leaving it for more than a week is risky.

All antivirus software tools allow for two types of scans, including ‘quick scan’ and ‘full scan.’ You can manually perform a ‘quick scan’ now and then – mostly when your PC is showing suspicious behavior. Additionally, schedule your PC to perform a ‘full scan’ once a week.

Q5: How important is it to keep AV software updated?

A: Keeping your antivirus up-to-date is important, considering the constant cyber threats our devices are faced with. Viruses are always evolving while mimicking new identities, and each time we connect our devices to the internet, we risk attracting these cyber-attacks.  Each antivirus update comes with necessary files to help protect our machines from threats.

Q6: If your computer gets a bad virus, what can you do to get rid of it?

A: Always pay attention to unusual behavior by your devices such as slower than normal speed, excessive pop-ups, and bizarre issues. Here are the steps you should take if you suspect a virus attack on your machine:

Q7: Can online privacy and a VPN help you with avoiding viruses?

A: Yes, installing effective online privacy tools such as VPNs should help protect your device network from virus attacks.

For instance, a VPN uses military-grade encryption techniques and advanced protocols as an extra layer of security for your devices on any network. And because most virus attacks are targeted to a specific user, a VPN will conceal your online identity with a new one, making it hard for attackers to get to you. VPNs also have a strict no-logs policy, which makes it difficult for attackers to keep tabs on your online activities.

Q8: How does an AV software work?

A: The free version of TotalAV has four feature sections, and each of them carries exciting functionalities. Here is a breakdown on how each of the four components works:

The software tool has all the four types of standard scanning options, including Quick Scan, System Scan, Quarantine, and Real-Time Protection.

There’s also a system boost feature which allows you to manage startup apps. You can choose which apps to disable during the startup of your computer – disable all apps that take a lot of processing memory at startup. You can also choose to uninstall programs slowing down your machine normal operations. Finally, you can use the browser manager to clear the browsing history automatically. 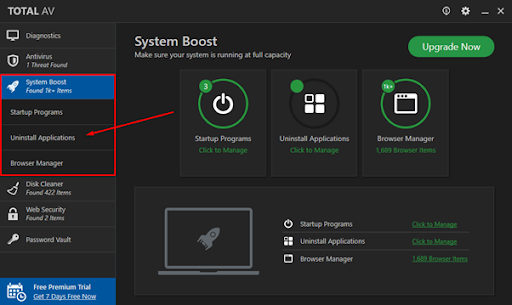 The free version of TotalAV also has disk cleaner feature which will help you to clear out unwanted files and create more space for your machine. Once you install TotalAV, the disk cleaner will automatically scan your laptop and identify all duplicate and junk files on your laptop. You can then choose to clear them later.

Its web security section comes with lots of exciting features. There’s a safe browsing VPN feature which will allow you to browse in stealth mode – keeping your online presence anonymous. Its firewall feature is always turned on and ensures the security of your network from malware attacks. To top it all, there’s an Ad block feature, which when enabled it will block adverts and other annoying pop-ups whenever you’re connected to the internet.